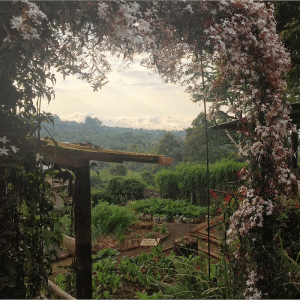 Martha Phillips spent four days at SENE’s Mbahe Farm Cottages after climbing Kilimanjaro in September 2019.  She wrote eloquently about her experiences and emotions during her adventure.

Below are the sections from Mbahe.  Read Martha’s complete account at The Imposter of Kilimanjaro.

I woke up suddenly in the darkest part of the night, completely disoriented.  I didn’t know where I was, how many people were in my tent, or which camp we were at on the mountain.  I needed desperately to pee, but that meant excavating myself from my sleeping bag and unzipping the tent door and shoving my freezing cold feet into boots lined with frost.

And then I pushed myself upright in bed and the world snapped back into place, settling itself back into a comfortable familiarity.  I wasn’t on the mountain.  There wasn’t anybody in my tent; there never had been and I wasn’t even in a tent.  I was in my quiet, private room at the farm, warm to the tips of my toes under a pile of duvets, and the bathroom was six steps away.

But my heart was still racing, thumping irregularly in my chest, adrenaline surging as my sleep-addled brain got ready to stagger out into the dry, dusty, icy wind of our Kilimanjaro base camp, more than 15,000ft above sea level, and gasp for air.

The next time I woke up it was just after seven on my final morning at the farm, and the thin, pale sunlight of dawn was fighting through the ever-present cloud cover that shadows the foothills of the mountain.  At 6,000ft above sea level, it was cold in my room, but not unpleasantly so; it was as if I were back in the late autumn mornings of my childhood in New England, sticking my nose out from under the bright pink patchwork duvet cover my mother made for me, waiting to hear the deep hum and roar as the furnace pulled oil from the great tanks in the dirt cellar and fought to warm our drafty farmhouse.  Eventually the call to breakfast downstairs would pull us from our warm cocoons, dashing on tiptoe to the dresser to find our thickest socks and heaviest sweaters.

On this morning, though, I only needed to pull on warm leggings and toss my down jacket over my midlayer, grab my book and walk up the path and stairs to the common room, where Romanos had already started a fire in the massive hearth.  The enormous logs, looking as though they were torn like strips of paper from the great cypress trees on the property, burned hot and smoky and the ashes drifted over my legs and settled into my hair.  I would smell like a campfire throughout my long travels home to the United States.

There was always coffee and tea and drinking chocolate and filtered water available.  The coffee was strong and hot and sprang to life with just a little added sugar.  There was hot milk available, direct from the friendly black cows that grazed endlessly on the green hillside just outside the main gate.  When breakfast came – bananas, mango, papaya, orange slices, fresh eggs scrambled with a mild tangy white cheese, warm banana bread, fresh blended juice with passionfruit and mint – Leonard the chef came down from his kitchen as well.  He’d made french toast this morning from the soft, dense wheat bread they serve instead of regular toast, and he wanted to be sure that I was ok with that.  I sent him and Romanos off with a laugh and assurances in English.

I didn’t – and don’t – have the words in Swahili to adequately convey to them that everything about this farm was unimaginable, almost magical, removed entirely from the universe in which I live and work, different from everything familiar to me, half a world away.

I arrived to the farm in the evening and had supper with a group of six Americans getting ready to head up the mountain the following morning.  I was still shocky from my rapid and abrupt transitions – mountain to Moshi to farm all within thirty-six hours – but Leonard’s dinner of vegetable soup, jasmine rice spiced with sultanas and cardamom, and dark, flavorful braised chicken were concrete, sensory items, and I clung to them and started to let my body settle.

My knees were still sore from our rapid descent from the summit two days prior.  My left knee was particularly painful, compensating for a long-standing weakness in my right hip, which also ached in protest.  My left wrist was noticeably swollen, scolding me for the death-grip I kept on my hiking poles as we scrambled down rocky stair-stepped paths.  The big toes on both feet were numb again, the nerves deadened from knocking against the front of my boots for more than twenty-two kilometers, all downhill.

I chatted with the other trekkers, answered as many of their questions as I could, gave small suggestions – cover your mouth and nose once you get into the dust, do whatever it takes to block the wind – and then excused myself in utter exhaustion, wished them sincerely good luck on the mountain, and made my way to my room.

I woke up the next morning in tears, a series of terrifying, technicolor dreams culminating in a well of grief for a friend who had died unexpectedly while I was mid-trek, disconnected from the world, unaware that he was suddenly gone.  It was eight in the morning and I had slept for nearly twelve hours.

When I slowly stepped out into the dawn, the farm was murmuring its morning song, roosters crowing, cows lowing in the field, staff calling to each other, a beautiful woman with her hair wrapped high in a red cloth sweeping the fallen eucalyptus leaves from the path.  The Americans had left in the dark hours ago.

I was the only guest left.  I would have the farm entirely to myself for the next three days. 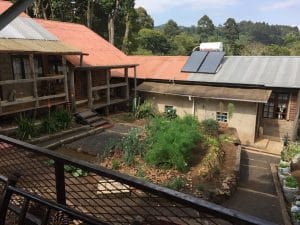 Abraham, the host and manager of the farm, sat with me under a covered veranda, just outside the common room.  The wind was cool but a late afternoon sun peeked through the clouds and would occasionally shine on my feet, curled up underneath me on the soft white bench cushions, propped up with fat square pillows in jewel-toned African fabrics.  I was drinking tea with sugar and scribbling phrases in Swahili into my notebook as fast as Abraham could throw them at me.

I paused uncertainly, trying to dissect the pronoun.  “…unaenda nyumbani?”

He gave me a bland look.  “Ninaenda nyumbani.  If I ask you where you are going, you don’t tell me where I am going, do you?”

There was a quick rustle, then a sudden loud bang and crash on the corrugated tin of the veranda roof above me.  I startled and jumped in my seat.  Now Abraham was grinning.

“Watch out for falling avocado bombs,” he said, and I sat back and closed my notebook.

Abraham had suggested an itinerary of morning and afternoon walks throughout the village, but I begged off for the afternoon, wanting nothing more than to sit in the fresh air with my feet up and read and write and think.  Abraham looked at me uneasily for a moment.

“I just would not want you to get bored,” he said.

I assured him that a quiet afternoon would be a joy, not a drudgery.  As a deeply introverted person who had just spent eight solid days with fourteen strangers (and seven guides and two cooks and sixty-five porters), not to mention the hundreds of other trekkers, guides and porters swarming the mountain, I could have spent a week cloistered in silent retreat and been perfectly content.

Still, it was enjoyable to follow Abraham that morning, rambling easily on the nearly-invisible footpaths that wove throughout the village, passing by small homes of wood and brick and the enclosed pens holding families of goats, pigs, cows, and rabbits; and meandering through fields planted using the fundamentals of permaculture, maize, beans, potatoes, bananas, elephant ear, cabbages, all mixed in orderly spaces to ensure a continual harvest and replenishment of the soil. 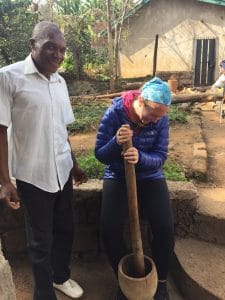 He once pointed to a fallow field, freshly turned, a cairn of softball-sized volcanic rocks piled neatly in the center.  “The women do this,” he said.  “They work the fields, planting, weeding, harvesting.  And care for their children and the home.”

I quickly scanned my memories of our walks; he was right, I had never seen a single man working any field or garden in the village.  Mildly indignant, I said, “So what do the men have to do, anything?”

He looked at me for a second.  “They are on the mountain.  They are your porters.”

I was silent for a moment, feeling very small.  “Oh,” I said quietly, and we made our way back to the farm.

He left me to read for most of the afternoon, but surfaced again an hour or so before supper, bearing a plate of hot roasted peanuts, and we sat together as he threw out vocabulary and easy phrases in Swahili.

I looked at him after the avocado bomb had passed.  “Learning Swahili is harder than climbing Kilimanjaro.”

I’d only found my answer to that question after I’d left the summit far behind.

On my last evening at the farm, after serving a superb strawberry-and-rhubarb compote for dessert, Abraham said good-night and left me sitting meditatively in the common room, watching the fire fall to embers on the massive cast-iron grate.  I watched the smoke drift lazily out the front of the fireplace – the chimney drew poorly – and dance around the lightbulbs hanging from the high ceiling before escaping into the night.  I drank my last cup of tea, gathered my things, and slowly made my way to my room.

The gentle orange glow of kerosene lanterns left at regular intervals along the path kept me from tripping over my feet, but the light barely reached the high eaves of the roofline.  I stopped just before my last turn, and looked up to the sky.  The clouds were dense overhead, and there were no stars nor any moonlight visible.  The farm was wrapped in warm grey blanket, sheltering us from the heat below and the icy winds above.

In my room, I stepped into the shower and stood there, the water just a degree from scalding, absorbing as much heat as a could.  I wiggled my toes – they were still numb, and the water made them tingle oddly, almost painfully – and knew that even after every other joint healed and all the bruises faded, their injury would linger, reminding me for months to come of my time on the mountain, and the choices I’d made to get to the top.

I stayed in the shower so long I became lightheaded, then jumped out, braided my hair, and dove under the rough, heavy covers of the bed.  A bird outside the building yelled into the dark of the night, its call wild and maniacal.

As I fell asleep I realized that I felt safe for the first time in a long time, safe and protected and isolated, coddled away from the tearing, ripping needs of that which is required of us every day, just to get by until the next tomorrow.  I knew then why the farm called up memories of a New England childhood for me on quiet, unconscious levels I hadn’t understood.

I held the sensation close to me, sank into it, cherished it for the gift that I knew it was, for however long it would last.