There’s much more to Mount Kilimanjaro than just standing on the summit.  In addition to stunning vistas one sees every day on the climb, the brilliant star-filled night sky, and the marvelous glaciers, the mountain possesses from four to six climactic zones (depending on how you measure them) and a multitude of unique plant species.  It’s great height (5,895 meters above sea level) and location in the tropics creates huge temperature variations from the summit to the base.  Along with the intense solar radiation from its proximity to the equator, moisture-laden clouds blowing in from the nearby Indian Ocean, and micro-climates common to massive mountains, makes Mount Kilimanjaro a most distinctive ecological entity.

Kilimanjaro’s number of distinct flora are staggering.  According to Lambrechts et al. (2001) there are 2,500 plant species on the mountain, 1,600 of them on the southern slopes and 900 within the forest belt. There are 130 species of trees with the greatest diversity being between 1,800 and 2,000 meters. There are also 170 species of shrubs, 140 species of epiphytes, 100 lianas and 140 pteridophytes. Countless of these are are endemic to Kilimanjaro itself.

How many different trees, shrubs, and flowers can you recognize yourself or identify with the aid of your SENE mountain guide?

Below you will find a list of some of the most well-known and easily recognizable plant species on Kilimanjaro, illustrated with photos and a description to help you find it during your climb.  Take note of the “fun fact” about each that you can share to show off your knowledge to your fellow climbers and even your mountain guide!

Photos are from our SENE library or from the internet (with credit). 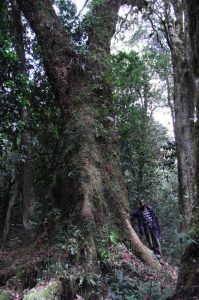 Swahili name: mkulo.
English name: East African camphor wood; camphor.
Location: On the southern and southeastern slopes from 1,600 to 2,100m.
Particularity: Dominant lower montane forest species.
Botanic Description: Ocotea usambarensis is a large tree that grows up to 45 meters in height with a spreading crown.
Trunk: Straight, slightly fluted, buttressed at the base, unbranched for 9-15 m.
Bark: Grey or reddish brown
Leaves: Opposite (alternate on sucker shoots), simple, elliptic to elongate-ovate or almost round, 4-16.5 cm long, 2.5-9 cm wide, dark green above, whitish below and camphor scented.
Uses: It is an important timber tree, valued for the resistance of its wood to fungal decay.
Also used medicinally. Malaria and backache are treated using juice obtained from roots that have been pounded and soaked in water. 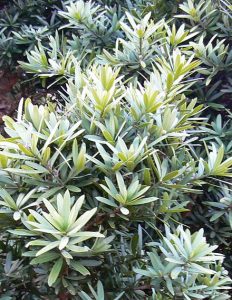 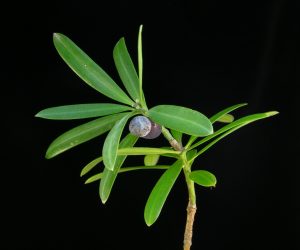 Swahili name: n/a.
English name: Real yellowwood.
Location: On the southern and southeastern slopes from 1,600 to 2,100m.
Particularity: n/a
Botanic Description: The real yellowwood is a large evergreen tree that grows up to 30 meters in height. It grows relatively slowly but forms a wood of exceptional quality.
Leaves: Strap-shaped, 25–40 mm long on mature trees or up to 100 mm long on young trees, and 6–12 mm broad, with a bluntly pointed tip. The bright-colored foliage of new growth stands out against the dark leaves of mature foliage.
Cones: Berry-like, with a single (rarely two) 7–11 mm seed apical on an 8–14 mm pink-purple aril (fleshy part of a fruit). The aril is edible and sweet.
Uses: The highly valuable wood is used for furniture and paneling.
Fun fact: The real yellowwood has been declared the national tree of South Africa and is protected there.

Swahili name: n/a.
English name: Wild chestnut; cape chestnut.
Location: In the sub-montane forest between 1,300-1,600m in the west and 1,600-2,000m in the north.
Particularity: n/a.
Botanic Description: Calodendrum capense is tall, up to 20 meters or more in height, but in open country and on the forest margin it is shorter and more spreading.
Trunk: Grey and smooth even in old trees and often buttressed and lichen covered in the forest.
Leaves: Smooth and aromatic with scattered, translucent dots; about 14×8 cm and borne opposite each other on the stem.
Flowers: Flowers borne in rather open terminal sprays or panicles, bisexual; petals 5 cm long, narrow, hairy, 4 x 0.5 cm, curling downwards, with a faint sweet scent. Petals and staminodes together make a light, airy flower in shades of rich pink or mauve marked purple or wine red, and very occasionally white.
Uses: The wood is hard and pale in color. It is easily worked, bends well, and is used widely for furniture, flooring, tool handles and implements. The bark is widely used as an ingredient in cosmetics, and the seed oil is used in soap-making. The seeds are readily eaten by birds and monkeys. 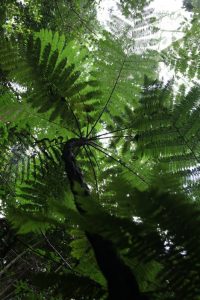 Swahili name: n/a.
English name: Spiny tree fern.
Location: On the southern and southeastern slopes in middle montane forest from 2,100-2,400m.
Botanic Description: Cyathea manniana is an evergreen tree fern growing up to 7 meters in height.
Trunk: Slender (10 cm diameter), reaching some 7 m in height, sometimes producing lateral stems which initially function as props or stilts, but later may form new trunks.
The fierce spines on its trunk make it readily identified.
Uses: An infusion of the pith and young leaves is used in traditional medicine for a variety of abdominal and gastric complaints, to ease childbirth and against tapeworms. 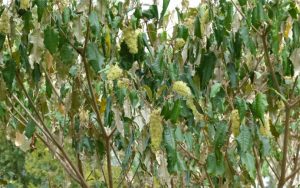 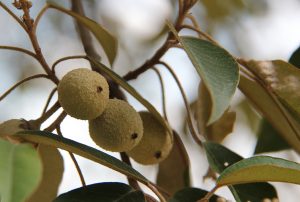 Swahili name: msenefu.
English name: Croton.
Location: In the sub-montane forest between 1,300-1,600m in the west and 1,600-2,000m in the north.
Botanic Description: Croton megalocarpus grows to 15-35 meters in height; it has distinctive layering of branches and a rather flat crown.
Trunk: Dark grey, rough, and crackling. Hardy and fast growing.
Leaves: Variable, long, oval and pointed to about 12 cm. The dull green upper surface contrasts with the pale, silvery underside.
Flowers: Very short-lived; yellow white, inserted in many- flowered, silver-budded racemes, up to 30 cm long.
Fruits: From green to greyish-brown as it matures. Endocarp hard and woody.
Uses: Well-dried nuts are reportedly used in some areas together with charcoal in cooking stoves. The tree is also utilized for firewood.
Fun fact: Recently, croton nuts are being used as a commercial product in local communities in East Africa. Previously a wasted resource, croton has been promoted as a local, more sustainable option for biofuel production. The nut itself has multiple uses but most well-known is the oil, used to make biofuel or biodiesel. 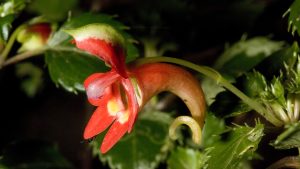 Swahili name: Impatiens kilimanjari.
English name: Kilimanjaro Impatiens.
Location: Kilimanjaro Impatiens is found nowhere else in the world except the forest floor of Kilimanjaro.
Botanic Description: Straggling glabrous perennial 30–40 cm. tall; stems well branched, often rooting at the lower nodes. Perennial species.
Flowers: Small (2 cm long). Sea horse-like looks and vibrant pinkish-red colors with curved yellow to orange tails. Inside the hood are a series of yellow and red markings. When the blooms are in the male stage, the stamens and pollen are purple.
Uses: n/a. 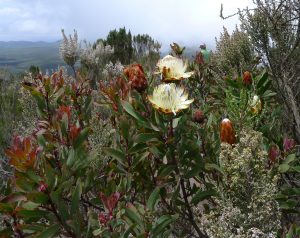 Swahili name: n/a.
English name: Alpine Sugarbush.
Location: upland moor between 2,300 and 3,800m.
Botanic Description: It is a subspecies of Protea caffra, a species of the genus Protea and family Proteaceae.
Protea kilimandscharica has an evergreen shrub or small tree with a somewhat rounded crown that can be 8 meters tall with a bole up to 40cm in diameter. The thick bark has a chunky, corky texture which protects the mature plant from the fires that happen so commonly in the grassland where it grows.
Uses: The plant is harvested wild for local medicinal use
Fun fact: The name “Protea” was given in 1771 by Carl von Linné. He used the name of the Greek god, Protea, which could change shape at will, because from the same basic flower, this genus shows an astonishing variation of shapes and colors depending on the species. 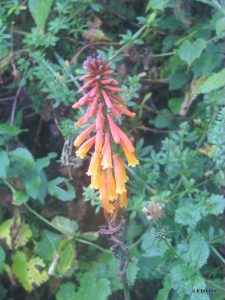 Swahili name: n/a.
English name: Red hot pokers.
Location: Upland moor at about 3,900m.
Botanic Description: Kniphofia grows to only about 90 centimeters (3 feet) tall in the wild.
Leaves: Keel-shaped with a glaucous blue green color. They are linear with a full margin.
Flowers: Flowers orange-red to yellow or a mixture, usually redder towards the apex of the raceme, pendent, often decurved; tube-shaped; arranged in clusters. Widely scattered (lax) on the last 45 centimeters (18″) of the inflorescences.
Uses: n/a. 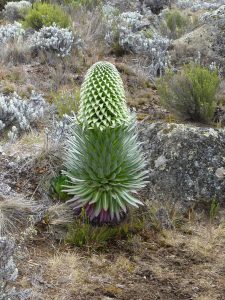 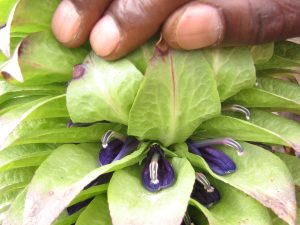 Swahili name: n/a.
English name: Giant Lobelia.
Location: In the alpine bogs.
Botanic Description:  It is an evergreen perennial herbaceous plant, 50 centimeters to 1 meter high, but its flower spike can reach a height of 3 to 8 meters.
Leaves: It has an underground network of 2 to 18 rosettes of leaves. It takes from one to several decades for one of these rosettes to emit a huge spike, after which the plant dies without affecting the other rosettes in the network as well as new ones. An adult rosette has more than 150 slightly hairy, green to bluish or purple lanceolate leaves with a full outline and a slight pinnate venation.
Flowers: It is a hermaphrodite plant which flowers after many years (up to several decades): from the center of the rosette of leaves rises a single large floral stem formed of long, slightly hairy, triangular bracts between which are hidden dark blue-violet flowers. These flowers consist of a chalice with 5 linear teeth and a zygomorphic corolla opening into 2 lips, the upper one narrow and curved above the stamens and the pistil, the lower one wide in the shape of a boat hull.
Uses: n/a.
Fun fact: Its specific name is a tribute to the German explorer Karl Klaus von Der Decken (1833 – 1865) on an expedition to Mount Kilimanjaro with the English botanist Richard Thornton (1838 – 1863). 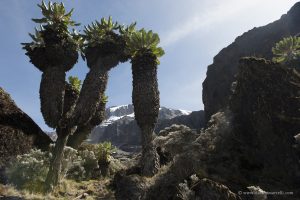 Swahili name: n/a.
English name: Giant groundsel; Senecio kilimanjari.
Location: Only occurring above 3600m.
Botanic Description:  Upright, polycarpic plant to 10 meters tall, with trunk to 40 cm in diameter; stem bears densely packed leaf-rosettes of 25–80 leaves, without internode elongation; cloaked with marcescent (withering but not falling off) foliage.
Leaves: Leaf lamina lanceolate or cordate, to 65 cm long and 22 cm wide, with lower portion of leaf constricted to form a pseudo-petiole; hair cushion present on upper leaf-base.
Uses: n/a.
Fun fact: It was originally known as Senecio kilimanjari, but a recent botanical reclassification split off some species formerly under Senecio, putting it and various other species in the new genus Dendrosenecio.

Roughly between 4,000m and 5,000m, with dramatic daily temperature contrasts. Plant life is restricted to around 55 hardy species of grass, lichen and moss. 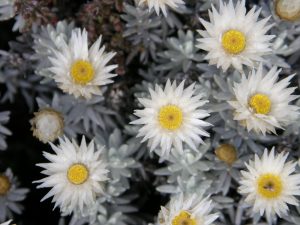