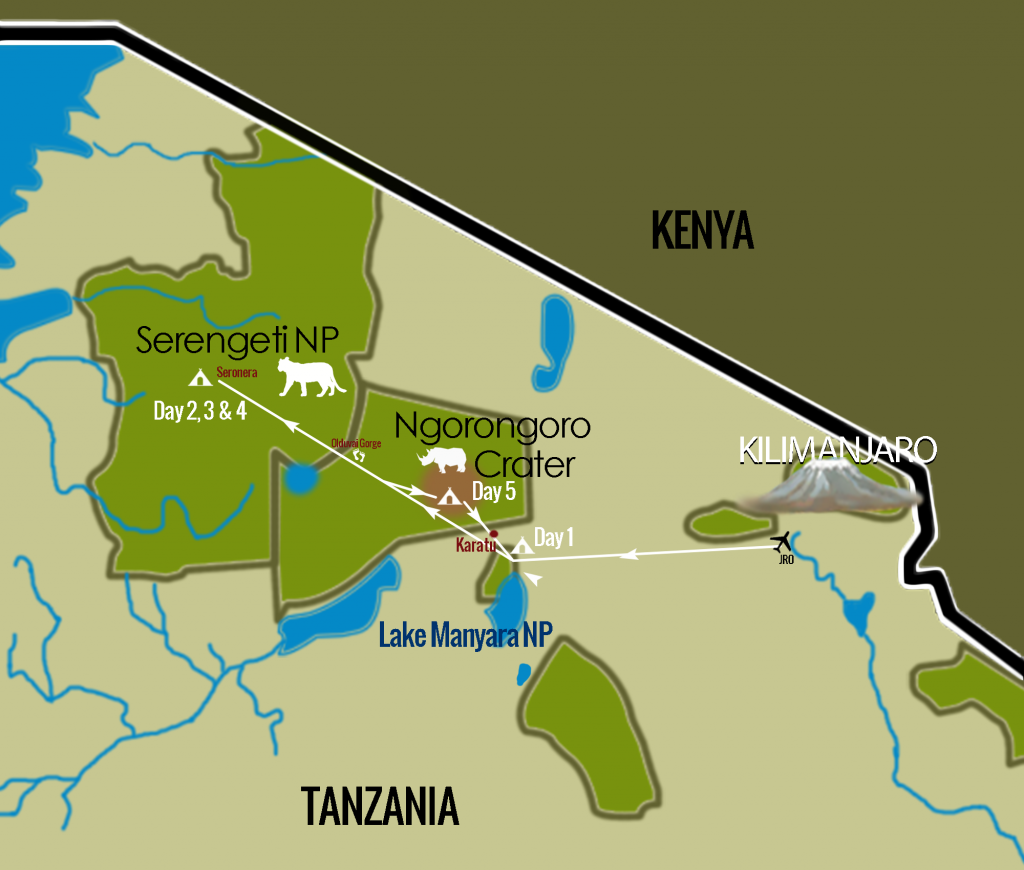 Highlights
• Start off with a bang at compact Lake Manyara National Park and finish with a flourish in the game-rich Ngorongoro Crater.
• Ngorongoro Highlands forest walk and visit to the archeological dig site at Olduvai Gorge.
• Connect with nature while enjoying the experience of simple but fully-supported wilderness camping, including two nights deep in the Serengeti and one night on the Ngorongoro Crater rim.

Detailed Itinerary
Day 1: Lake Manyara National Park
In the morning meet your SENE guide with a fully-equipped 4WD safari vehicle and head for the Maasai Steppe, home to the many spectacular wildlife parks of Tanzania. Your first destination is beautiful Lake Manyara National Park, famous for its tree-climbing lions and soda lake full of hippo and tinted pink with huge flocks of flamingos. Approaching the park, the Rift Valley Escarpment looms on the horizon – forming a spectacular backdrop to the lake. In the park’s varied environments of groundwater forest, acacia woodland, and grassy flatland you can easily observe at close range giraffe, zebra, buffalo, large troops of baboons, monkeys, and more.
Picnic lunch in the park and unlimited game drives.
As the sun sets, ascend the Rift Valley to your overnight camp in the Ngorongoro Highlands.
Overnight: Kudu Camp
Meals: L,D
Drive time to Lake Manyara: 2 hours from Arusha


Day 2: Ngorongoro Highlands / Serengeti National Park
After breakfast take a guided two-hour hike through the forested highlands inside the Ngorongoro Conservation Area, where a majestic 150-meter waterfall awaits. Along the way, visit the elephant caves, so-called because the deep recesses in the valley wall are created by elephants digging up the earth to ingest the mineral-rich soil. This soil also attracts buffalo, bushbuck, waterbuck, and baboons to the area.
After lunch at camp depart for the Serengeti and a game drive deep into the heart of this vast wilderness, where we set up camp for two nights.
Tanzania’s largest national park is 5,700 square miles consisting of treeless plains, savanna dotted with acacia and granite outcroppings called kopjes, riverine bush, and forest. Across its boundless expanse animals extend as far as the eye can see in a scene that exists nowhere else in the world and one that is quintessentially African. The Serengeti contains a staggering amount of wildlife – about 4 million animals– and is home to a million and a half wildebeest, a quarter million zebra, twice that many gazelle, and tens of thousands of the their predators (lion, leopard, cheetah, hyena, jackals, crocodiles, and others).
Overnight: Seronera Camp
Meals: B,L,D
Drive time to Serengeti: 3 hours

Day 3: Serengeti National Park
Today, your SENE guide, a trained expert in East African wildlife and ecology, will explore with you the vast Serengeti Plain in search of the best game-viewing opportunities, dependent on the seasonal and daily migration patterns. You may take an early morning pre-dawn game drive and late afternoon drive at dusk – the times of day when the animals are most active – with a rest at camp for lunch. Or, take a full day game drive with a picnic lunch to explore a greater range of the Serengeti.
Overnights: Seronera Camp
Meals: B,L,D

Day 5: Ngorongoro Conservation Area / Arusha
After an early breakfast descend nearly 3,000 feet to the floor of the Ngorongoro Crater, where the 100 square mile extinct caldera teems with wildlife in density and abundance that is hard to imagine. Every game animal – both predator and prey – in East Africa can be found here, with the exception of giraffe and impala. The Crater is the best place to spot the rare and elusive black rhino and old bull elephants who come there to “retire” and enjoy the sweet swamp grasses. Picnic lunch in the crater.
In the afternoon return to Arusha Town, the bustling commercial capital of northern Tanzania, where you may shop for curios and artwork prior to transfer to the Kilimanjaro International Airport or your onward destination.
Meals: B,L

Inclusions
Exclusions
Cold beverages and alcohol; activities on safari and at lodges that require additional charges; gratuities to trip leaders, guides, drivers, crew, or other staff; international airfare; airport departure taxes; additional accommodations made necessary by airline schedule changes or other factors; pre-trip expenses such as immunizations, travel insurance, passports, and visas; and any expenses of a personal nature, such as souvenirs and laundry.
Disclaimer
Accommodations listed in sample Top Itineraries or in custom draft itineraries SENE creates may not be available on requested dates, in which case we will find a suitable substitute, striving to match the standard of the original. We reserve the right to adjust the trip price if accommodations change.  Trip prices are based on SENE costs, fees, and supplier prices in effect at the time of booking. SENE reserves the right to alter trip prices should inflation, cost of fuel, labor, materials, or exchange rates change. If the Tanzania National Parks Authority (TANAPA) raises park fees, or any hotel, lodge, camp, airline, or any other service provider raises their rates, SENE reserves the right to require additional payment from the client.