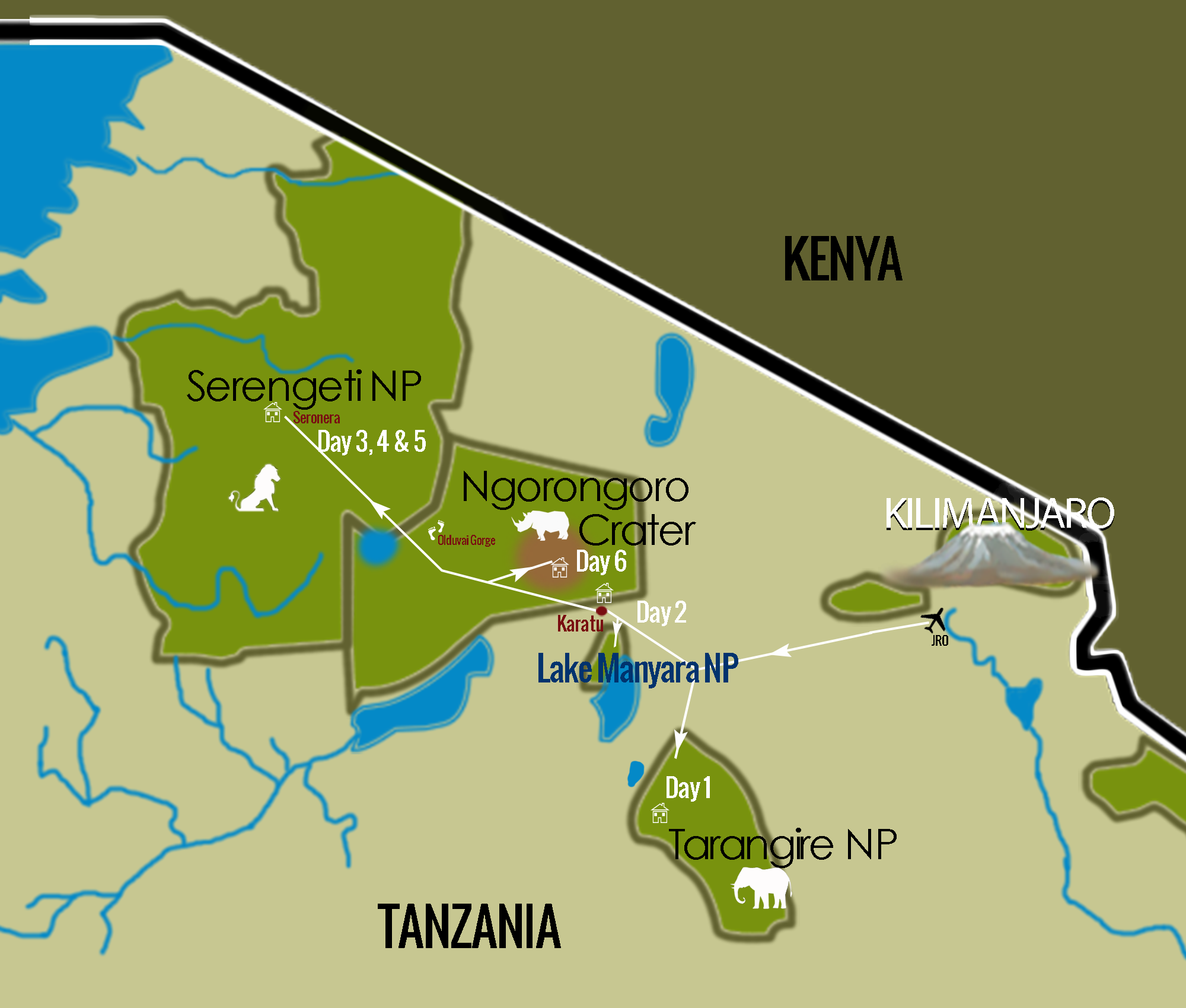 
Day 2: Tarangire National Park / Lake Manyara National Park
Early morning game drive before breakfast to experience Tarangire as it comes to life. After breakfast continue game viewing as you enter beautiful Lake Manyara National Park, famous for its tree-climbing lions and soda lake full of hippo and tinted pink with huge flocks of flamingos. As we approach the park, the Rift Valley Escarpment looms on the horizon – forming a spectacular backdrop to the lake. In the park’s varied environments of groundwater forest, acacia woodland, and grassy flatland you can easily observe at close range giraffe, zebra, buffalo, large troops of baboons, monkeys, and more. Manyara also boasts a profusion of more than 380 bird species. As the sun sets, ascend the Rift Valley to your overnight accommodations in the Ngorongoro Highlands.
Overnight: Farm House Valley Lodge
Meals: B,L,D
Drive time to Lake Manyara: 1 hour
Drive time to Ngorongoro Highlands: 30 minutes

Day 3: Ngorongoro Conservation Area / Serengeti National Park
Stretch your legs with a guided two hour light morning hike through the Ngorongoro Conservation Area forest – teeming with bird life and unique flora – to a majestic waterfall and elephant caves (so-called because the deep recesses in the valley wall are created by elephants digging up the earth to ingest the vitamin-rich soil).
After lunch at the lodge depart for the Serengeti and a game drive deep into the heart of this vast wilderness. The Serengeti is arguably the most famous wildlife area in the world. It’s pure numbers are staggering: about 4 million animals reside within its ecosystem, including a million and a half wildebeest, a quarter million zebra, a half million gazelle, and tens of thousands of the their predators (lion, leopard, cheetah, hyena, jackal, crocodile, etc.). The park also offers breathtaking scenery unto itself. Scattered throughout the southeastern short grass plains are kopjes, geologic wonders comprised of exposed gneiss and granite shaped by the wind and temperature fluctuations. Different environments emerge as you head deeper into the Serengeti, where you will find riverine forests, acacia woodlands, hills, and open grassland that create a vast geographic mosaic.
Overnight: Kati Kati Tented Camp
Meals: B,L,D
Drive time to Serengeti: 3 hours

Day 4: Serengeti National Park
Your guide, a trained expert in East African wildlife and ecology, will explore with you the vast Serengeti in search of the best game-viewing opportunities, dependent on the daily migration patterns. You may take a pre-dawn game drive and another drive at dusk – the times of the day at which the animals are most active – with a rest at camp for lunch. Or take a full day drive with a picnic lunch to explore a greater range of the vast ecosystem.
Overnight: Kati Kati Tented Camp
Meals: B,L,D

Day 5: Serengeti National Park / Olduvai Gorge / Ngorongoro Conservation Area
Continue your exploration of the Serengeti in the morning. After lunch we return eastward, rising up from the dry plains to the cooler and verdant Ngorongoro Highlands. Stop along the way to tour Olduvai Gorge, the site of Louis and Mary Leakey’s archeological discoveries of early human ancestors dating back 1.8 million years. The site consists of a small but comprehensive museum on the rim of the gorge and the opportunity to descend into the gorge to visit some of the dig sites. Also visit a nearby Maasai homestead, where you will meet these regal tribesmen known for their beaded jewelry, dramatic dancing, and steadfastness to their indigenous culture. Ascend to your splendid overnight accommodations perched on the eastern rim of the Ngorongoro Crater.
Overnight: Ngorongoro Sopa Lodge
Meals: B,L,D
Drive time to Ngorongoro Crater rim: 3 hours

Day 6: Ngorongoro Crater / Arusha
Today we descend into the Ngorongoro Crater, often referred to as Africa’s Eden. Ngorongoro was an active volcano that collapsed, leaving a caldera 10 miles in diameter; the views from the crater rim are breathtaking and wildlife abounds inside. We descend 2,500 feet into the crater to explore this paradise of abundant and diverse wildlife. Here you can observe the rare and elusive black rhino and admire the old bull elephants who come there to “retire” and enjoy the sweet swamp grasses; prides of lion are easily spotted throughout. A trip into Ngorongoro Crater is an experience not to be missed.  Picnic lunch in the crater or hot lunch back at the lodge.
In the afternoon return to Arusha Town, the bustling commercial capital of northern Tanzania, where you may shop for curios and artwork. Enjoy a relaxing dinner at one of the best safari lodges on the verdant outskirts of Arusha prior to transfer to the Kilimanjaro International Airport and your flight home.
Meals: B,L,D
Drive time to Arusha: 3 hours

Inclusions
Exclusions
Cold beverages and alcohol; activities on safari and at lodges that require additional charges; gratuities to trip leaders, guides, drivers, crew, or other staff; international airfare; airport departure taxes; additional accommodations made necessary by airline schedule changes or other factors; pre-trip expenses such as immunizations, travel insurance, passports, and visas; and any expenses of a personal nature, such as souvenirs and laundry.
Disclaimer
Accommodations listed in sample Top Itineraries or in custom draft itineraries SENE creates may not be available on requested dates, in which case we will find a suitable substitute, striving to match the standard of the original.  We reserve the right to adjust the trip price if accommodations change.  Trip prices are based on SENE costs, fees, and supplier prices in effect at the time of booking. SENE reserves the right to alter trip prices should inflation, cost of fuel, labor, materials, or exchange rates change. If the Tanzania National Parks Authority (TANAPA) raises park fees, or any hotel, lodge, camp, airline, or any other service provider raises their rates, SENE reserves the right to require additional payment from the client.