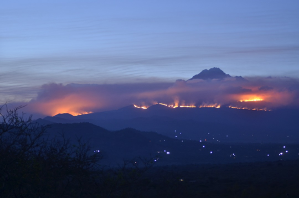 As many of you may have seen in the news last month, a fire raged over our beloved Mount Kilimanjaro for a week, from October 11th to October 18th. The fire burned 70 square kilometers of Kilimanjaro’s vegetation in the Whona area. This included the razing of nine huts at Horombo Camp, but the newer huts and dining hall were unscathed and the route is now re-opened. The challenge the fire brigade faced in stopping the spread of the fire was great as we are in the middle of our dry season and there were strong winds helping to carry the fire along. The fire took place in the ridges of the Whona area (see map). Unlike previous fires that took place in the mountain’s forest, this occurred in the moorland zone, where the high altitude, terrain and strong winds presented a greater challenge to the fire brigade and local volunteers. The fire could be seen as far away as Moshi, 18 miles from Mount Kilimanjaro.

On Thursday, October 15, the area received some very needed rain and on Friday, October 16, arrangements were made to receive a helicopter from Kenya to help provide larger quantities of water. The helicopter worked from Friday until Sunday when the fire was finally put out. Simon was instrumental in arranging the helicopters arrival. TANAP is now looking into buying a helicopter specifically for Kilimanjaro National Park in order to be better prepared for any future fires.

Tanzania National Parks (TANAP) officials have reported that the fire was accidently started by “porters who were serving climbers” on October 11th. As they were warming the food, the fire caught on some of the surrounding dry grass. Given that we are in the middle of the dry season, the fire was able to spread fast. 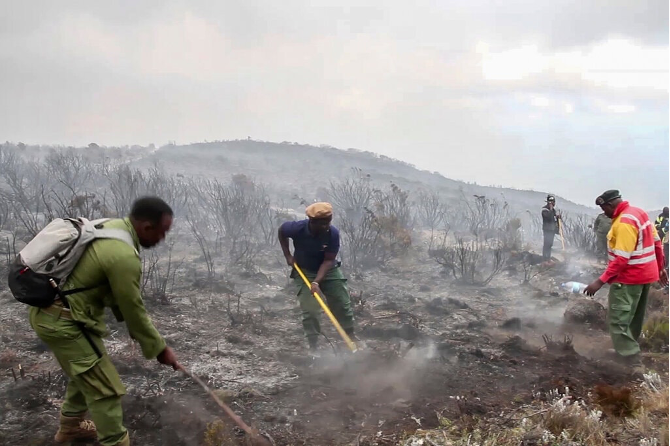 Although this fire has caused damage to Mt. Kilimanjaro, this story is also about the incredible community support and volunteers who dropped everything to come help the fire brigade put out the fire. Close to 600 volunteers from the surrounding areas assisted in putting out the fire. It was imperative to stop the spread of the fire not only to protect the mountain’s vegetation and wildlife but also the water sources for the surrounding villages. Mbahe locals, who have a history of helping put out smaller fires on Mt. Kilimanjaro, came to help the firefighters. Other villagers from Mshiri, Lyasongoro, Komalyangowe, Kitowo and students/staff from Mweka Wildlife College also came to assist the fire brigade. Many tour companies from around the area sent guides and porters as well as food and blankets for all volunteers. Even better news, there were no fatalities or injuries reported. 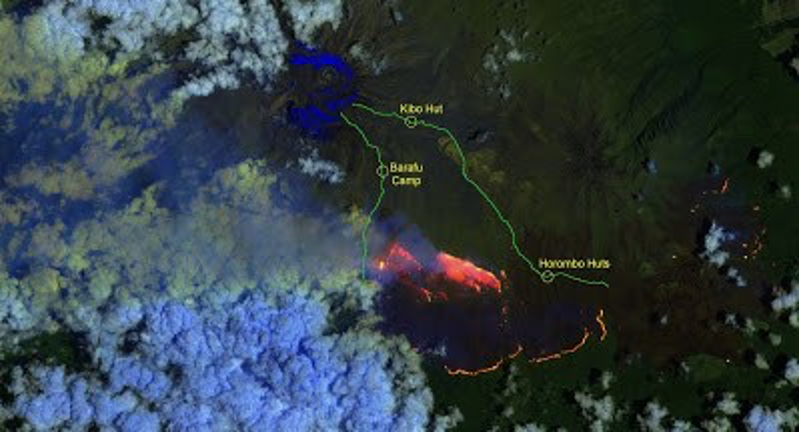 Image of the fire on October 15th, taken from the Sentinel-2 satellite. (PC: Dr. Douglas Hardy)