Tanzania is a tropical country in East Africa on the Indian Ocean. It is more than twice the size of California with a 2017 population of 57 million. Tanzania lies a few degrees south of the equator, enjoying a moderate tropical climate with seasons regulated by rainfall rather than temperature.

The coast, including the largest city Dar es Salaam and the islands of Zanzibar, are hot and humid with cooling breezes off the Indian Ocean. Inland Tanzania, which includes all the safari parks and Mount Kilimanjaro, is on the African plateau with base elevations ranging from 600-1200m above sea level.  This elevation moderates the heat so that days are warm and nights are cool throughout the year.

Most regions of Tanzania experience two rainy seasons. The long rains last from mid-March through early June and the short rains from November through December. The long rains consist of regular periods of steady, soaking downpours and the short rains usually entail light morning or evening showers. Regional variations occur and even during the rainy seasons rarely a day goes by without some sunshine!

Travel to Tanzania is excellent at any time of year – there is something to appreciate during every season!

The Tanzania Coast and Zanzibar.  Temperatures are always warm. The months of January and February can be particularly hot, but the sea breezes regulate the temperature, so you can take full advantage of the paradisiacal beaches of the islands.  The months of April and May account for 40% of the annual rainfall on the islands and the majority of the hotels are closed.  The rest of the year is relatively dry with sun almost every day. The islands are at their peak for travel between June and October.

Inland. Safaris in northern Tanzania  – especially in the Serengeti and the Ngorongoro Crater – are excellent throughout the year. The coolest months are June and July and the warmest January and February, though seasonal variations are only a few degrees. The dry season months of July through October are best for animal viewing as grasses are low, making for excellent visibility, and seasonal water sources dry up, forcing the concentration of wildlife. Heavy rains fall from mid-March to early June, with a peak in April.  During these “green season” months, you will enjoy the safari parks in tranquility while prices at lodges and bush camps are reduced significantly. In the short rainy season, from early November to mid-December, tourist numbers are also down while the colors of the savannah are sublime.

While massive herds of wildebeest can be found in the Serengeti year round, during the annual wildebeest migration certain parts of the park are more favorable at certain times of year:

The best time to visit Tarangire National Park runs from June to November, when the permanently flowing Tarangire River is the only water source in the area. The migrating herds will converge along the river during this time. From October to April you can admire some 300 species of birds, many of them are migrants from the European winter. 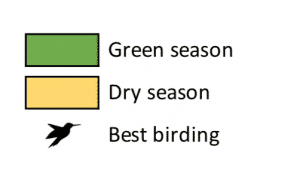 Mount Kilimanjaro. It is possible to climb Kilimanjaro year round on any route, even during the season of heavy rains.  Only on very rare occasions does the weather prevent climbers from reaching the summit.  During the rainy seasons, the Rongai route, ascending from the drier northeast side of the mountain, is a good choice at that time of year.

Good to Know. Tanzania’s peak tourist seasons correspond with the dry season months of July through August and the Christmas and New Year’s holiday period.