The baobab tree is easily recognized by its enormous trunk and scrawny stems and twigs. It is one of the most distinctive symbols of Africa. In Tanzania, visitors can admire baobab trees within all national parks, but particularly in Tarangire National Park, which is unofficially known as the “Baobab Capital of the World.”

About this iconic tree there are many myths, stories, and interesting and fun facts about its history, habitat, uses, and more! 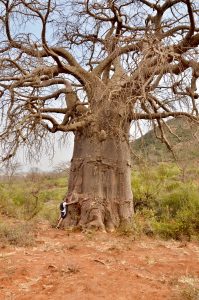 Its name comes from the Arabic word bu hibab, which means “fruit with many seeds.”
There are nine types of baobab trees in the world.  Six are in Madagascar, one in Australia and two on mainland Africa and the Arabian Peninsula. The ones found in Tanzania have the scientific name adansonia digitata and are the largest of all varieties.

Baobabs are often referred to as upside-down trees, because of the root-like appearance of their tangled branches. Baobab trees grow in hot and dry woodland environments in areas that receive low rainfall.

They begin flowering at around 20 years of age. During the southern hemisphere summer, the tree produces very large and heavy white flowers. Their crinkled petals and large clusters of stamen give baobab flowers an exotic appearance. They open during the late afternoon and stay open for one night only, emitting a strong and stinky odor. Flowers attract fruit bats and various insects. The seeds are located in pods, and the resulting fruit is gray and hairy.

The baobab has the only fruit in the world that dries naturally on the branch. It will not drop, but rather stay on the branch and bake in the sun for up to 6 months – transforming its green velvety coating into a hard coconut-like shell. The pulp of the fruit dries out completely. This self-drying fruit simply needs to be harvested, de-seeded, and sieved to create a fine powder used in cooking or as a health supplement.

The baobab is often referred to as the “Tree of Life” as it provides life-sustaining shelter, clothing, food, and water for both humans and animals of the African savanna regions. 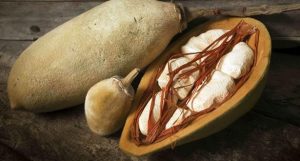 Every part of the tree is used by humans:

In seasonally arid areas, Baobabs can store water in their trunks (up to 4,500 liters / 1,200 US gallons) to endure harsh drought conditions.  This water has two functions – to keep them standing upright and to help them flush new leaves at the beginning of the growing season.

The size of a tree varies, as it can shrink and expand depending on its needs and the amount of water it absorbs. In the dry season the trunk shrinks; when water is abundant the trunk expands to support more water storage.

Massive but not so indestructible…

Another giant in the bush can cause great damage to baobabs. Because they know that baobabs store water in their trunks during the dry season when water is scarce, elephants look for baobab trees to quench their thirst.

The bark of the baobab is soft enough for an elephant to poke a hole through it. Once this protection is gone, the elephant has access inside to the best part where water is stored. 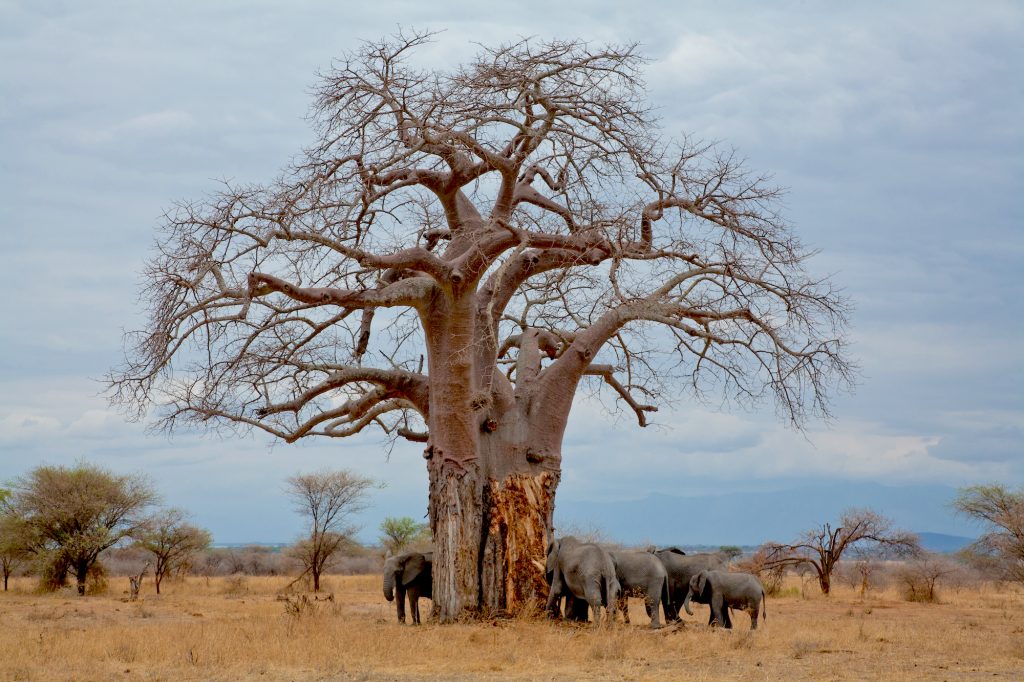 The baobab is a source of many legends and traditions among peoples of Africa: 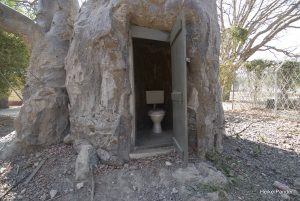 Large baobab trees with hollow trunks have been used by people for centuries for various purposes, including houses, prisons, pubs, storage barns, and even as a bus stop!

One tree in the Caprivi Strip (part of Namibia located between Botswana, Angola and Zambia) was converted into a toilet, complete with a flushing system!

A huge old baobab in the former Transvaal region of South Africa is recorded as once being used as a dairy.

Not only do humans make use of the tree, but animals of the savanna regularly use it for shelter, while African honey bees often utilize hollows in the baobab to make their hives.

Try for Yourself… Baobab Smoothie! 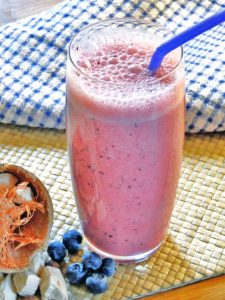 Combine the yogurt and apple juice in a food blender and stir together. Add banana, baobab pulp and blueberries and puree until smooth.

Pour into a tall glass and enjoy!